The High Court has confirmed that an employee who suffered injury after a TUPE transfer but as a result of a negligent act or omission committed by his previous employer before the transfer was entitled to recover damages from his new employer.

The Judge held, pursuant to regulation 4(2)(b) of the Transfer of Undertakings (Protection of Employment) Regulations 2006, where the negligence causing an injury had occurred prior to the transfer but the personal injury was not suffered until post-transfer, liability passed from the transferor to the transferee – tortious liabilities transferred whether they were fully accrued or contingent. To hold otherwise would frustrate the TUPE provisions, the purpose of which was to safeguard the rights of employees, not protect the transferee from unknown liabilities.

In July 2012, C was at premises replacing a series of lamps. He was working at height with one of the light fittings when he was electrocuted, causing him to suffer a cardiac arrest and to be thrown to the floor. He struck his head and suffered a severe brain injury.

It was not in dispute that C had sustained a massive electric shock because the junction box had been mis-wired causing the casing of the light to become permanently live, whether the light switch was on or not. The second defendant, J&L Electrics (‘D2’), had installed the electrical circuits and lighting at the premises in 2004, some 8 years before the index incident. C’s primary case was that the mis-wiring occurred at that original fitting and had been present since then.

Prior to 2010, C was employed by a company, Connaught Compliance Electrical Services (‘Connaught’), who had carried out periodic inspections of the premises including in 2009 and September 2010. In October 2010. C’s employment was transferred from Connaught to D1 by TUPE transfer. C claimed that, although D2 had mis-wired the light, D1 was also liable for failing to identify the fault during its subsequent inspections.

The Judge found as a fact that the wiring error occurred at the time of the original installation. Therefore, D2 “was plainly responsible for it”. In those circumstances, liability on the part of D2 was established.

The more complex question was in respect of D1. The Judge found that the defect was present at the time of the periodic inspections in 2009 and 2010. The fault was not picked up during those inspections and expert evidence demonstrated that it should have been. After restating the “fundamental principle of common law that an employer is required to take all reasonable steps to avoid risk of injury to his employees” (para. 55), the Judge found that Connaught had been tasked with carrying out routine safety inspections and, as such, there was no excuse for not detecting and remedying an obvious hazard. The fact that an employer had a ‘work dead’ policy – meaning that employees were obliged to de-energise the circuit before working on the components – did not remove the duty to take other reasonable precautions to protect employees from a risk of injury (para. 58).

Had it not been for the TUPE transfer, Connaught would have been vicariously liable for the failure of its employee, Mr Coward, to carry out an inspection of the fittings with due care. Connaught’s last inspection occurred on 21 September 2010. On that date, both C and Mr Coward were employed by Connaught. One week later, D1 purchased Connaught’s assets. Payment for the inspection was received by D1 after the date of the transfer. D1, therefore, had the benefit of the work done by Connaught before the transfer.

D1 argued that at the date of transfer there was no liability to transfer under TUPE. It submitted that there was no authority for imposing liability on the transferee for “liabilities which are unknown to the employee or transferor – because they do not exist”. D1 further argued that it was well-established that an employee can recover for personal injury sustained before a relevant transfer and caused by the transferor’s breach but that liability does not arise where the breach occurs before the transfer but injury is only sustained after the relevant TUPE transfer date.

The Court rejected this argument as “a fundamental misunderstanding of the purpose of the [TUPE] Regulations”. The effect of the transfer was that all the rights, powers, duties and liabilities under or in connection with C’s contract of employment transferred from Connaught to D1. The Court held:

the whole purpose of the Regulations is to provide protection to employees in the event of a change of employer and to ensure their rights are safeguarded. [D1’s] argument switches the focus of consideration to the protection of the transferee in that he objects to the transfer of liabilities unknown at the time of transfer. The Regulations are not designed to protect the transferee from unknown liabilities. On the contrary, the situation where a breach of the employer’s duty occurs before the transfer but injury occurs after falls squarely within the Regulations. The injured employee’s employment is deemed to be continuous and the duties and liabilities arising under or in connection with his contract of employment transfer with him. Regulation 4(2)(b) specifically provides that:

It appears that the rationale for the Judge’s decision can be found in the following extract: “It is quite clear from this that tortious liabilities transfer whether they are fully accrued or contingent. To hold that an employee who is injured after the transfer but as a result of a breach of duty committed before the transfer cannot recover against the transferee would frustrate the whole purpose of the Regulations and the underlying Directive” (para. 68).

In short, pursuant to regulation 4(2)(b) of TUPE, liability will pass from the transferor to the transferee even where negligent acts or omissions occur pre-transfer but the personal injury is not suffered until after the transfer.

Consequently, C succeeded against both D1 and D2 on a 25% / 75% basis. The Judge also rejected any finding of contributory negligence against C. 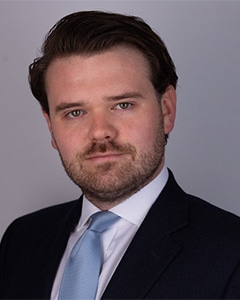